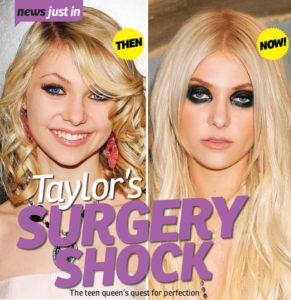 There’s something that’s changed about Taylor Momsen since she hit our screens as Jenny in Gossip Girl – and it’s not just those growing teenage-diva temper tantrums.

Sources close to the actress claim to NW that since she found fame, she’s had two nose jobs!

“Taylor had the first shortly after she started Gossip Girl, but it was very subtle,” alleges the source. “The second came this year – and that one was way more noticeable.”

Sydney plastic surgeon Dr Robert Drielsma confirms she could have had a dalliance with the scalpel, saying, “Taylor’s nose looks narrower and the tip appears more refined in the more recent photo, which would suggest a cosmetic rhinoplasty procedure.”

His belief that her snout’s too symmetrical to be natural is shared by Sydney plastic surgeon Dr Laith Barnouti. He says of the rocker and face of Madonna and Lourdes Leon’s Material Girl collection, “Taylor has likely had a nose job, she has a well-defined tip – nicely projected and proud.”

“She was adamant she wanted surgery,” claims a source on the Gossip Girl set.

“She thought her nose made her look too ‘cute’ and young. She wanted to look edgier, and more striking.

“She was pretty clever with it, too. Because she changed her whole look so suddenly, it was hard to tell her face had actually changed. She wears so much more make-up than she used to, and has her hair extensions, and wears much more shocking clothes, so you don’t really focus on her nose. But she almost looks like a different person.”