Luke’s childhood was not made any easier by the fact that he had large ears that stuck straight out from his head. His parents didn’t allow him to grow his hair, but once he left for university, Luke let his hair and beard grow long to hide his ears. But his ears would still stubbornly peek out, even from his thick wavy hair and bushy beard.

When he graduated, Luke got a job as a town planner. His new job demanded a traditional professional look, which meant the long hair had to go. Luke believed that his protruding ears would make people take him less seriously. At this point, he felt that his career was on the line.

He was very uncomfortable with the idea of plastic surgery at first, but he felt he had no choice. I performed ear pinning surgery to pivot his ears closer to his head because Luke wanted them to stop sticking out. The result was that for the first time, he felt comfortable not hiding his ears behind a mane of long hair. Luke now enjoys his short-haired look and marvels at how low-maintenance it is! 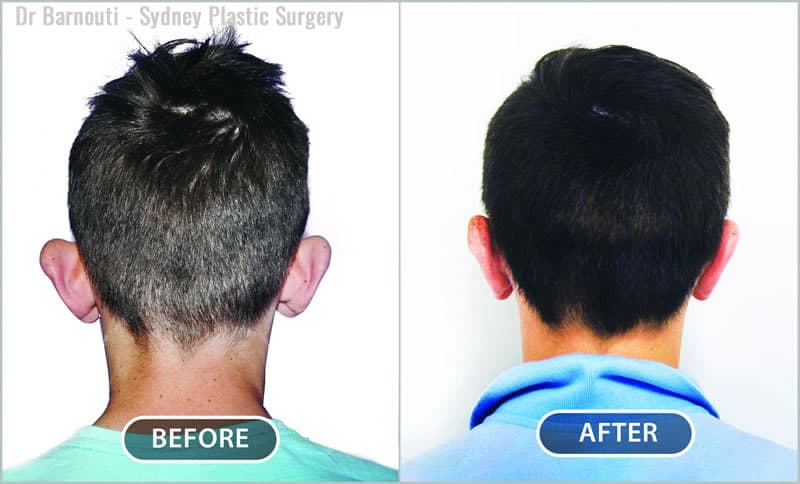 Not only do this patient’s ears now lie nicely against his head, but the scars are completely hidden.

Ear pinning surgery, sometimes called otoplasty, is used to treat a condition where one or both ears are more prominent than usual.

To correct prominent ears or bat ears, an incision is made on the back of the ear to expose the cartilage. Usually, a small portion of the cartilage is removed and then folded towards the head and the ear is stitched back to hold it in its new position. An otoplasty procedure usually takes about 90–120 minutes and the resulting scars are behind the ear where they can’t be seen

This blog post is an excerpt from Dr Barnouti’s book “Your Guide To Modern Plastic Surgery: How To Enhance Your Natural Beauty And Avoid A Plastic Surgery Disaster” which is available now on Amazon.

As you can see, the position and symmetry of a patient’s ears are important in planning the surgery.

See  more ear correction surgery before and after photos here >>