Neck Liposuction (Neck Lift): The term “double chin” is a misnomer. A double chin is essentially a neck problem, not a chin issue. It is due to excess fat in the area of the neck that is directly below the chin, hence creating the appearance of an extra chin or double chin.

When this problem happens, it does so to varying degrees, with the worst cases appearing like double chins. In less severe cases, the under-side of the chin may just look plump without being a double chin. Irrespective of severity, extra neck fat is the source of the problem. As fat is the cause, liposuction is the most sought-after treatment for it.

Face/Neck Lift
Before After Photos

Not all neck fat is extra. It is important, in fact critical, to have a certain amount of neck fat to provide a cushion between your skin and neck muscles. Without it, your neck would look unnatural. Yet, extra neck fat is considered by most to be undesirable. Extra neck fat may be hereditary, and if so is normally evident in early adulthood. It may also be developed; in which case, it is gradual with weight gain. There are also those who have extra neck fat in response to aging, even in the absence of weight gain. In these cases, fat can accumulate in the neck due to a redistribution of subcutaneous fat that happens with aging.

Irrespective of its cause, extra neck fat can cause an individual to look heavier as well as older. In fact, it is surprising how neck liposuction (Neck Lift) can make someone with extra neck fat look drastically younger.

Many who have extra neck fat also suffer the problem of having no distinction between the face and neck, in other words; it is difficult to tell where the face ends and the neck starts. In these cases, liposuction of the neck along the jawline really assists to define this area and can be performed at the same time as neck liposuction (Neck Lift).

Jowls are the pockets of fat alongside and above the jawline, about halfway between the ears and the chin. While

Again, this is something best discussed between you and your plastic surgeon.

Neck liposuction can be performed under local and sedation as an outpatient procedure. It takes 30-60min. Your plastic surgeon will commence by injecting your neck with tumescent fluid, which is a mixture of saline, local anaesthetic (similar to Novocain and epinephrine) which helps constrict blood vessels, reduce bleeding, and prevent bruising. Tumescent fluid is not injected until you are temporarily asleep, so that you feel nothing. Followed by making a keyhole incision under the chin to insert the cannula and start drawing out the fat with suction. At the completion of the procedure, the keyhole will be closed with fine sutures; this will leave you with virtually an undetectable scar under your chin.

Following the procedure, pain is relatively minimal and most finds that they can return to work in 1-5 days, depending more upon bruising than on discomfort. You will need to wear a tape or a garment on your neck for few days. Again, your greatest limitation with regard to returning to work will likely be due to bruising. Some have no bruising; others may bruise for 1-2 weeks. Most fall somewhere in between with about 3-7 days of bruising. There is no simple way to predict where you will fall.

Getting you back to work and normal activities

You will need 1-2 days rest, followed by light duties for 1 week.

You will be back to normal duties from the second week after surgery.

Dr Barnouti MBBS, FRACS (Plas) is one of Sydney’s leading plastic surgeons, specializing in plastic and cosmetic surgery. He will provide you with honest advice, and will only recommend surgery if he believes it is in the best interest of your health. Read more here >> 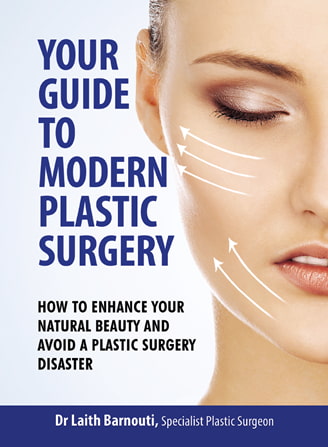