“Don’t let your neck reveal your age,” said the advert on the TV.

Laura laughed. “Seriously? How is my neck going to reveal my age?”

However, six years later Laura noticed the beginnings of changes in her neck. The skin was beginning to have an aged, crepey appearance, and suddenly her neck muscle bands became visible. She realised with horror, “I have a turkey neck! My neck says I’m 65, but I’m only 50!”

Laura was, at the time, highly resistant to plastic surgery. When she discovered that a neck lift surgery is a day-only procedure and can restore the fullness of her neck, she changed her mind. The result put a big smile on Laura’s face. “I don’t want to look like I’m 30,” she said. “I’ve earned these lines, and every line on my face tells a story. But that turkey neck was appalling. I am amazed at the result and feel super confident. My neck can keep my age a secret!”

A  full and taut neck is one of the signs of youth and beauty. With age, subdermal fullness disappears, and the skin texture gradually deteriorates, leaving behind unsupported, crepey skin. A neck lift, when performed properly, achieves structural support by advancing and tightening the muscles, removing excess skin to restore a more youthful neck.

Necks don’t lie about your age. While many women use makeup, Botox and fillers in their faces to look more youthful, forgetting to include their necks in their makeovers only brings attention to the fact that they have had “work” done.

Best-selling author Nora Ephron actually wrote a book in 2006 called I Feel Bad About My Neck. Then 65 years old, Nora had resorted to wearing turtlenecks to hide her ageing neck and complained about the lack of a remedy for sagging necks (short of plastic surgery).

The reality is that surgery is the best option even for someone who is sporting a full turkey wattle. A neck-lift performed on its own, or in combination with a facelift, is the best remedy with the most lasting results.

Neck liposuction corrects the dreaded “double chin”. The term “double chin” is actually a misnomer. A double chin is essentially a neck problem, not a chin issue. It is due to excess fat in the area of the neck that is directly below the chin, which creates the appearance of an extra chin or double chin.

This blog post is an excerpt from Dr Barnouti’s book “Your Guide To Modern Plastic Surgery: How To Enhance Your Natural Beauty And Avoid A Plastic Surgery Disaster” which is available now on Amazon. 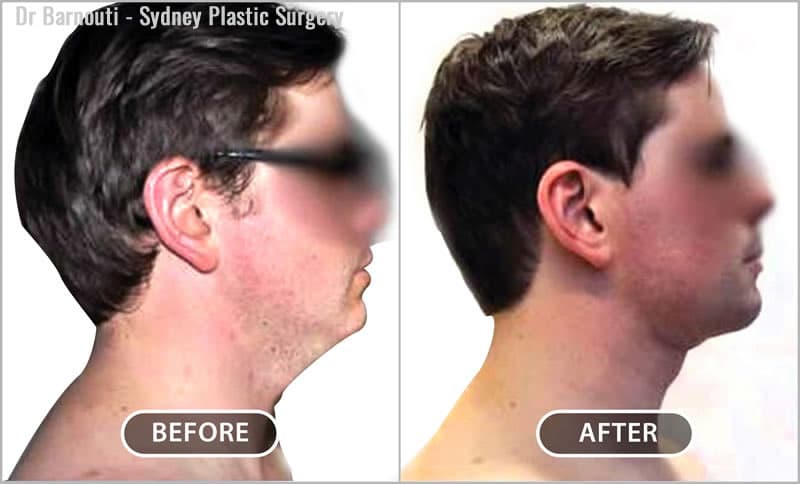 You can see the effect liposuction had on this patient. In the after photo, his chin is more defined, and his turkey wattle is gone, yet his neck looks natural. 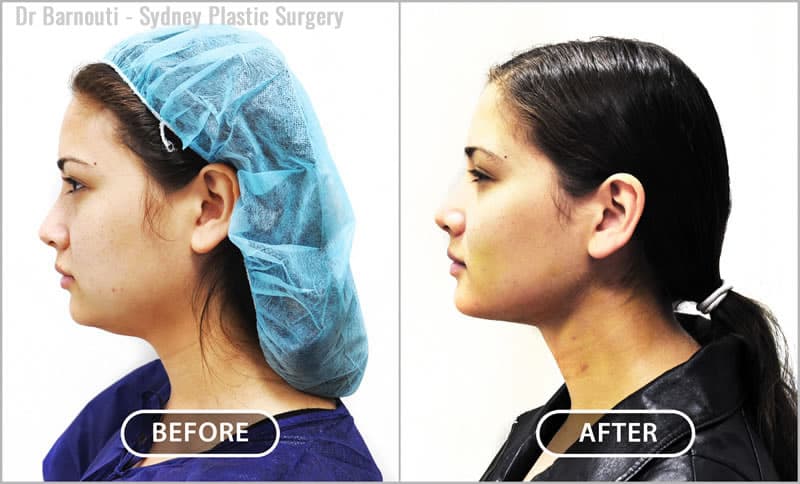 This patient had neck liposuction and buccal fat pads removal. 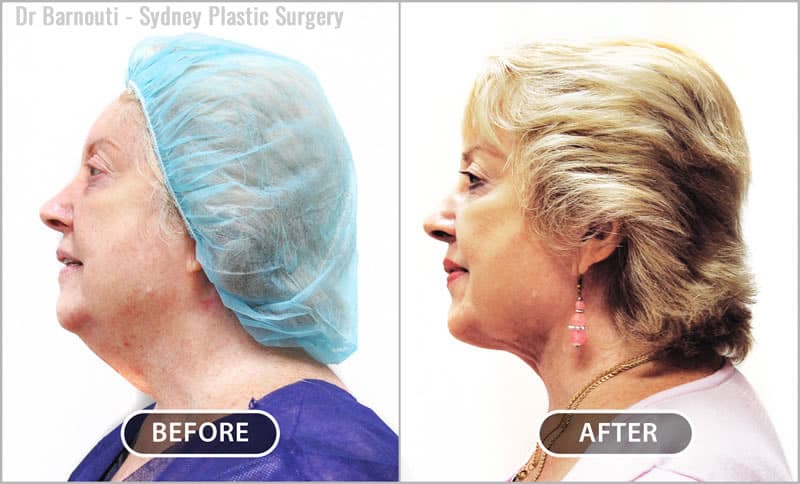 When this problem of excess fat happens, it does so to varying degrees, with the worst cases appearing like double chins. In less severe cases, the underside of the chin may just look plump without being a double chin. Irrespective of severity, extra neck fat is the source of the problem. As fat is the cause, liposuction is the most sought-after treatment for it.

If the skin is reasonably tight, then liposuction is all that is needed. If the neck skin is very loose, then a neck lift and/or laser may be required, in combination with neck liposuction.

Not all neck fat is extra. It is important, in fact critical, to have a certain amount of neck fat to provide a cushion between the skin and neck muscles. Without it, the neck would look unnatural. Yet, extra neck fat is considered by most to be undesirable. Extra neck fat may be hereditary, and if so, is normally evident in early adulthood. It may also have developed; in which case, it is gradual with weight gain. There are also those who have extra neck fat in response to ageing, even in the absence of weight gain. In these cases, fat can accumulate in the neck due to a redistribution of subcutaneous fat that happens with ageing.

“Gramps doesn’t have a neck,” remarked Jack’s four-year-old grandson. While everyone in the room cringed with embarrassment, Jack laughed it off.

Over the years, Jack had put on weight, leading to heavy jowls and neck and back fat that made it look as if he had no neck. His grandson’s remark was a wake-up call. His health had been declining due to obesity. Jack realised he might not be around much longer to play with his grandkids and so he went on a strict diet and within two years, had lost half of his excess fat. The trouble was, the extra fat and skin on his jowls did not retreat and he still looked as if he had no neck.

I performed neck liposuction and a neck lift on Jack to create a distinct neck. This gave Jack the confidence to keep going with his weight loss and keep taking charge of his health. Today, at 60, Jack enjoys playing football with his grandsons. He still remembers the day he came home from the surgery, looked into the mirror, and found a well-defined neck that he had not seen for 15 years!

Many who have extra neck fat also suffer the problem of having no distinction between the face and neck. In other words, it is difficult to tell where the face ends and the neck starts. In these cases, liposuction of the neck along the jawline assists to define this area and can be performed at the same time as neck liposuction or neck lift.

Neck and jawline liposuction procedures are performed as an outpatient procedure and take 30–60 minutes. I begin by injecting the neck with tumescent fluid, which is a mixture of saline, local anaesthetic and adrenaline, which helps constrict blood vessels, reduce bleeding and prevent bruising. I then make a keyhole incision under the chin to insert the cannula and start drawing out the fat with suction. At the completion of the procedure, the keyhole is closed with fine sutures; this will ensure a virtually undetectable scar under the chin.

See  more neck surgery before and after photos here >>